Around My TU - Brocadia

In other posts I have shared my Holtzmann's Corridor subsector, where my monthly game group is playing. Here's a planet from another part of my TU, the Weitzlar subsector Glorious Empire Subsector. This region is where I'm trying out some concepts and running some characters solo, without it having an impact on the main gaming group.

Here I present Brocadia, a world of that subsector, that has a few interesting features and I hope a number of adventure possibilities. Enjoy. 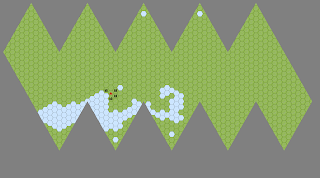 Starport: B. Good construction and repair facilities for non-starships

Brocadia has almost no surface features of any kind. No mountains, no valleys, no hills. It is as if the planet was graded and paved like a parking lot. There is very little vegetation above moss and ferns. The surface is a patchwork of green and dull brown.

The Kingdom of Brocadia is beset by a tyrannous and paranoid monarchy. The last four kings died by assassination, but only one from outside the royal family. The royals all live in fear of their subjects, and the subjects are made to fear the royals. The Noble Houses scheme and intrigue against one another constantly for control of land, and access to the King.

The Big Thing: Secret Police see traitors everywhere; A Noble House is trying to bring back peace and stability. Is the King really in danger?

The Brocadian Yards produce over half of all the non-starships in the subsector.

What kind of adventures could your PCs get up to on Brocadia?

n.b. some of the details, like Culture Tags, I brought over from Stars Without Number.
Posted by Robert Weaver at 4:38 PM