Map Key:
Each of the colored hexagons represents a solar system with at least one inhabited planet. Each hex represents a distance of one parsec, the length of 4.3 light-years. 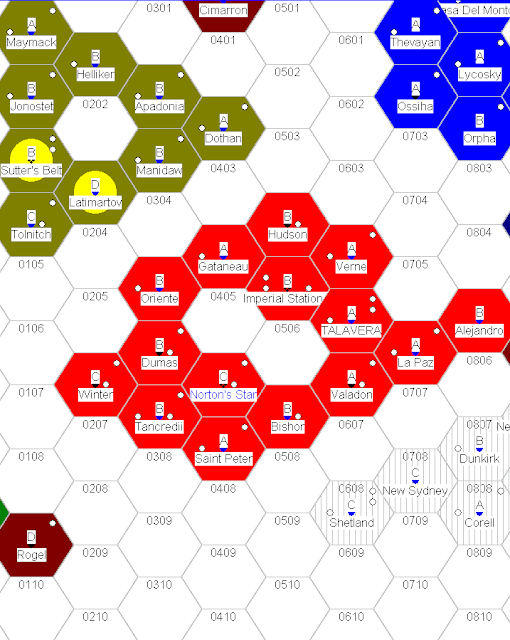 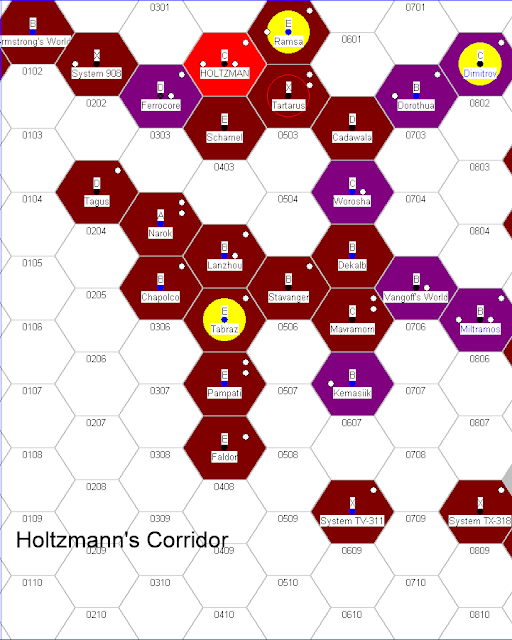 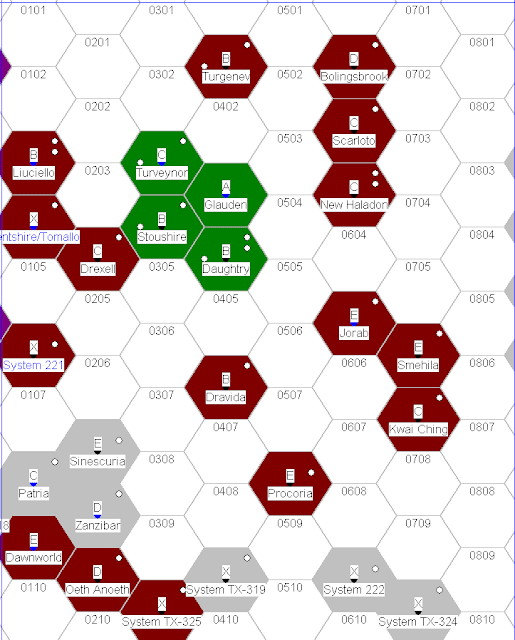 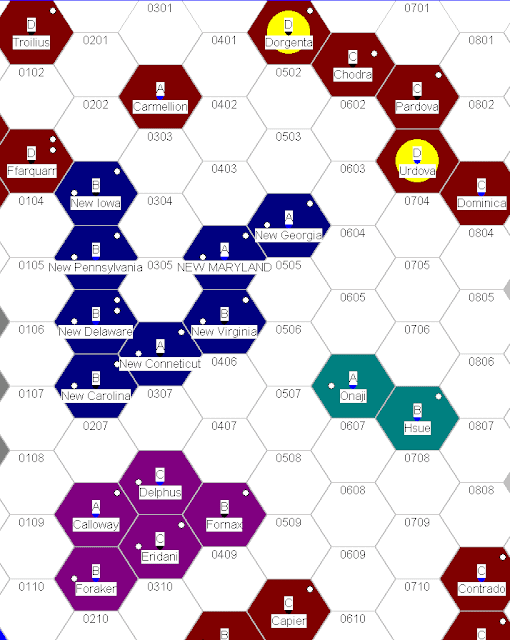 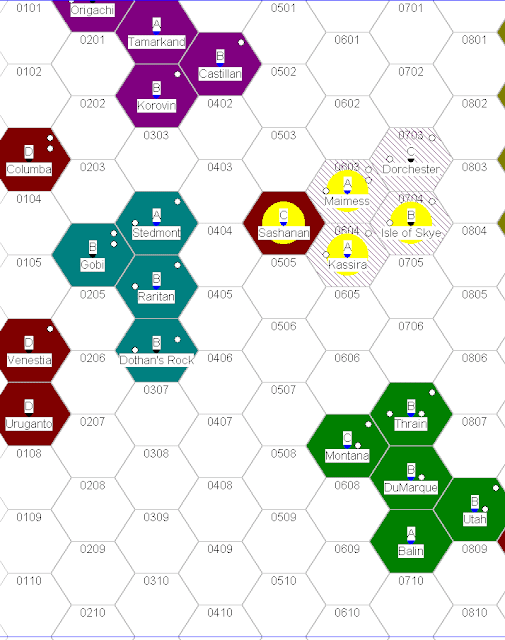 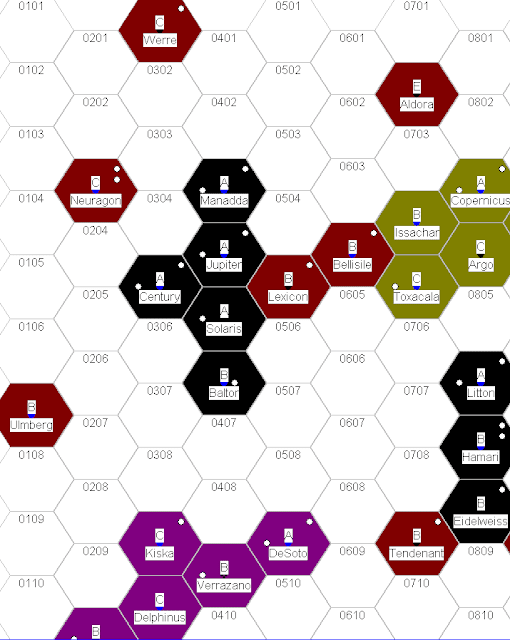 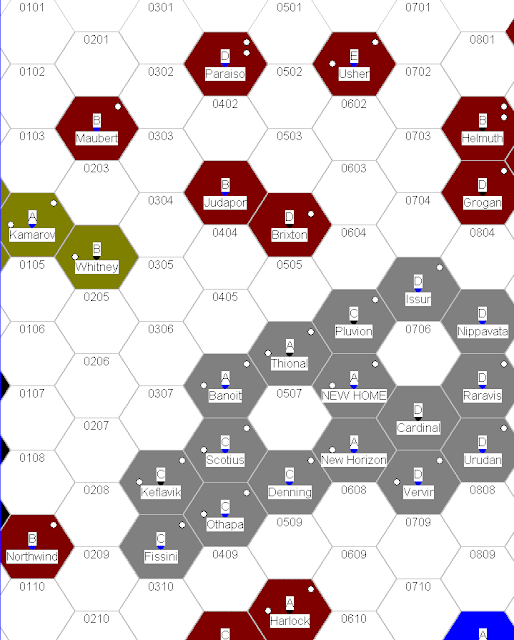 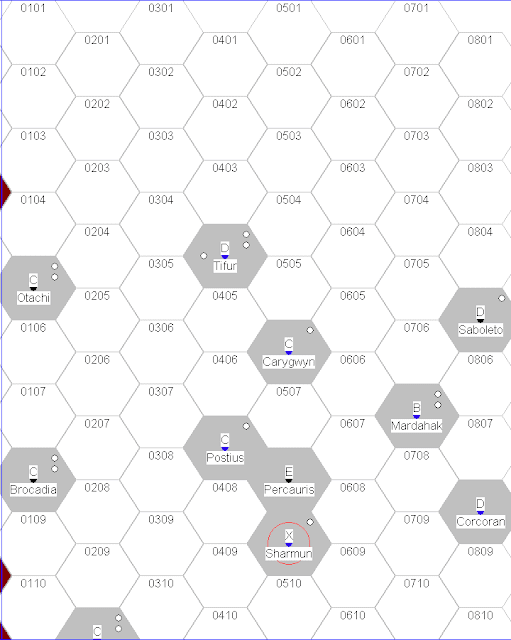 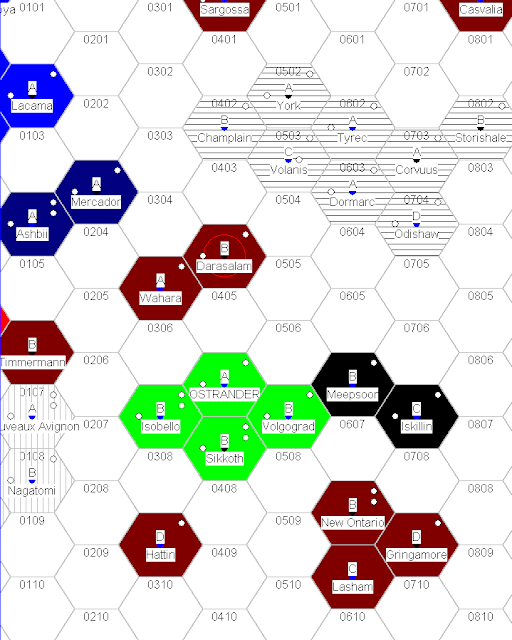 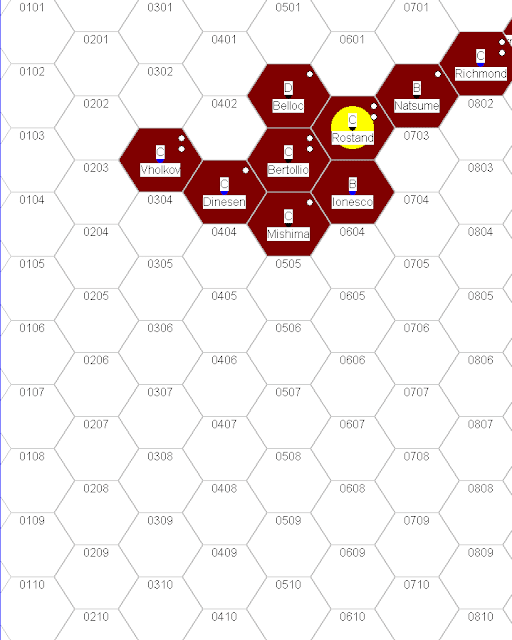 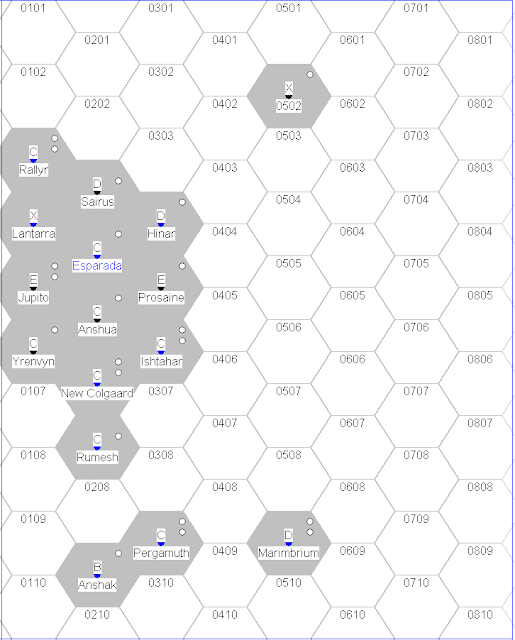 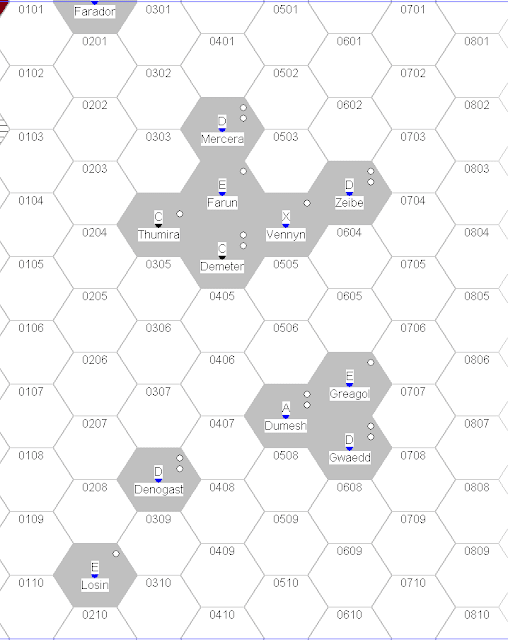 The first working jump drive, called Project Starseeker, was developed by NASA and Lubold Aerospace in 2105 A.D. The theory of jump space had existed in astrophysics labs for over 40 years prior to the creation of a working drive, and the idea of FTL travel had existed for hundreds of years before that. In 2102, Dr. Gary Ward, a physicist/computer scientist and Dr. Ronald Travis, a metallurgist/architect/propulsion engineer presented a computer model of a revolutionary space ship that could travel FTL by opening a temporary gateway to dimension #9, (by that time, the existence of 25 distinct dimensions had been proven by astrophysicists) allowing a ship to "jump" from one place in N-space to another.
On April 6, 2105 Michael Jernigan became the first human to travel beyond Earth's Solar system. Starseeker broke into "jump-space" and traveled 2.48 light years to Proxima Centauri, took a few images of the star and it's planetary system and jumped back to Earth, returning on April 22.

Within five years of Starseeker's historic mission, NASA had launched 12 missions to Proxima and other nearby stars. Several scientific stations had been established, and even a mining colony on an airless moon of Proxima's fourth planet.
Within ten years, corporations had established colonies on their mining/industry planets, and an unknown number of private ventures had taken to the stars. Some estimates by modern historians suggest that there may have been as many as 200 separate space flights by government, corporate and private groups. No real effort had been made to regulate who left the planet; the idea that people would want to pack up and leave had not been seriously considered by most governments until reports on the numbers of people leaving began to be collected.
Not every starship was as successful as Starseeker. Among scheduled flights, there were 15 recorded disasters in the first ten years. Ships jumped but never reappeared, or simply exploded before entering jump space.
The first recorded survivors  of a failed jump occurred in 2111. Astro Lab's research vessel, the Hawking entered jump space outside Sol and emerged 180.3 light years away. During the three week journey in jump space, most of the crew fell ill, and several died. The surviving crew was able to make another jump and reached a mining outpost, where the mine staff rescued them and had the crew returned to Earth.

A note about Time
The current year in my universe is 925 SA (space age). This is reckoned by the same atomic clocks that are used in real-life Earth. When mankind began colonizing other worlds, scientists and politicians realized the need for consistent time-keeping, since no two planets have the same length 'year'. So atomic clocks were provided to all colonies. Planets track two time scales: Galactic Standard Time (Earth units of second/minute/hour/day/year, and Local time, which corresponds to the orbital/rotational period of their own planet. GST allows coordination across space for conferences & so forth.

The companion to GST is the SA calendar. It is measured in GS time, and uses as the year Zero the year that man first moved to colonize another world, 2200 AD.