Are there Soccer Moms in Space?

If there are, then we have a vehicle for them. Designed by my son, using the Mgt 2e Vehicle Handbook. Enjoy, if you can. 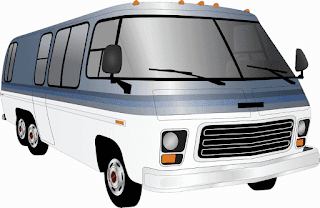 
Roomy and comfortable, the minivan is perfect for adventuring in town. The GPS is capable of linking in to a city's navigation grid for an easy commute to meet a Patron or visit a Startown Bar. If you roll with a smaller crew, there's plenty of cargo space. Simple and efficient design with an optional speed governor so even under manual control you never have to worry about those pesky Legal Encounters - this vehicle just won't break the speed limit!
Posted by Robert Weaver at 10:30 PM No comments:

Review of Piracy and Privateering

You might have thought that the pirates were supposed to be the NPCs, but surprise! The book begins with a persuasive essay aimed to encourage players to play as pirates!

The book contains five sections:
The book is system-neutral throughout. It leans toward the 2D6 dice rolling mechanic, but it would not be difficult to transition any of the tables into any 'variable degrees of success' dice rolling system. For OGL legal reasons they can't say it works with Classic Traveller, but I can. It does. That makes me happy.

Setting up
Is the campaign going to be in a Star Spanning Empire, or among competing star nations, or the fringes where it's every planet for themselves? This is an important consideration, and the author lays out the good and the bad of each type. My TU is competing star nations, and a lot of Independents. Pirates will use different tactics depending on where they are.

Wherever your piratical PCs set up, there has to be enough potential for profit to make it all worthwhile. The referee/GM has to consider this or it will be a short and unhappy campaign.

For the sake of players and GMs who aren't familiar with the practicalities of piracy, the book lays out a method of doing the deed, labeled “Piracy 101”. This section goes into a helpful amount of detail on things like:

More Traveller Literary History? or Not

Traveller literary history – or maybe not.

I thoroughly enjoyed Clarke's Hide and Seek short story, so when I brushed up against another one of his from the following year, I stopped to say hello.

It was a dull conversation. I am really disappointed with The Inverted Man
(Thrilling Wonder Stories, V36, #2 June 1950) Perhaps I should have read the cover story instead.

The story concerns a power plant engineer named Nelson. He is caught inside his new very modern generator apparatus when a freak set of circumstances throws it into overload. There is a huge thunder-clap, and Nelson goes down, but survives.

In the hospital, the doctors discover that Nelson has been Inverted: he is now a stereo-isomer of himself. His left hand is now his right, his hear is on the other side, etc. He reads and writes backwards.

So far so good, right? Good old H G Wells Invisible Man stuff. But at this point Nelson fades into the background. He has no more dialogue and takes no independent action.

The focus shifts to Dr Hughes, another engineer at the power company. Three science lectures later, Hughes tries to recreate the conditions of the accident to put Nelson 'right' again.

I'm going to ruin the ending now, so if you want to read this story, stop here.
Read more »
Posted by Robert Weaver at 9:09 AM 3 comments:

In Defense of Older Adventurers

On occasion, some gamers like to remark on the fact that Traveller characters are mostly middle-aged by the time they begin play (assuming they survive character creation). Is it really necessary for me to point out that the off-screen prior service is simply glossing over the “low level play” of level based systems, or the “few character points” stage of point-buy systems?

Don't harass us middle-aged guys who go off in search of adventure. We're not old, we're experienced. It's at this time of life when you finally know what you want, and go after it. And you're not taking any guff from punks.

Like this guy – he took no guff, and took names.

With thanks to Jed McClure on G+
https://en.m.wikipedia.org/wiki/Samuel_Whittemore

Stealing Stuff for Fun and Profit


From the official description:


"A system-neutral guide to How To Be a Pirate! With explanations to help gamemasters run complete space pirate campaigns. In it, you will find guidelines for setting up a piracy or privateering sandbox campaign. There are fully developed encounter rules for figuring out which poor unfortunate souls have crossed paths with terrible player character pirates. We have also included system-neutral rules for fleshing out encounters with ships, space stations, and other unexpected sources of adventure. There are rules for selling ill-gotten booty, for splitting up crew shares, and for holding privateer courts."

I'm already using bits of it for my ongoing campaign - playing tomorrow! Once I read through the whole thing, I will post my review here. Check back soon!