PC perspective of a game event

This story was written by Longfinger's player. It is from his perspective, where he refers to himself in the third person as Allistair.

Allistair walked into the club. He had spotted Stephy, and had seen him gambling his money, and his time, away. Allistair mentally rolled his eyes.
I've only been under his employment for a few days now, and I'm already utterly disappointed, he thought.

He walked over to him, noticing that Stephy was winning by more than Allistair cared to count. Looking down on him, he could see a very well executed poker face plastered onto the Baron's face.
"Good evening Captain. I don't mean to intrude, I just wanted to check up on you. The crew and I were a little concerned about you and Miss Tawny leaving the ship," whispered Allistair.

"Oh it's quite alright Longfinger, we're just relaxing a bit before we shove off tomorrow," replied Stephy in a half attentive voice.
Even more quietly, Allistair whispered in the Baron's ear,
"I'd also like to apologize for my earlier behaviour, I meant no harm to you in the slightest."
"Don't worry about it my boy, I understand your motives completely."

Stephy then turned his attention to one of his fellow gamblers, whom he seemed to know, with a confused look upon his face.
"Have you seen Tawny anywhere? She's been absent for twenty minutes," he inquired, although he didn't sound concerned.
The gambler shook his head. Allistair then saw a chance to be of service, for since the age of sixteen he had made a covenant with whom his people referred to as "The Gardener".

"I could fetch her for you if you'd like of me Captain," he offered.
Stephy merely shrugged and casually uttered, "If you wish."

Read more »
Posted by Robert Weaver at 9:32 PM No comments: 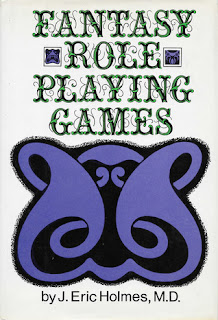 In it he discusses a number of games that were on the market in 1980, including Traveller. He mentions, on page 46, a number of 'modern authors' from whose works Traveller is derived. The list is:

I would add to that list for my own TU and games:

Who inspires you to adventure in the realm of Traveller ?