The Most Dangerous Skill - Bribery

From Faoladh, in the comments section on an earlier post:


"I suspect that the reason most players don't use Bribery is simply because most aren't used to thinking of it as a way of doing business, but instead think of it as a form of corruption first. Perhaps it is, but that isn't the way that everyone in the world thinks of it. Referees, too, have to leave room for bribery to be just part of the cost of doing business instead of setting off alarm bells every time that a player leaves a stack of Cr100 notes in the middle of their passport."

Bribery is a Basic Skill from Book 1, and can be acquired by Merchants and Others. In Supp-4, Rogues can also get this skill. It makes sense to me that at least Diplomats, Bureaucrats and Pirates or even Sailors should be able to have this skill as well, but it is not there. The block quote here is from Starter Travller's Rule Book. 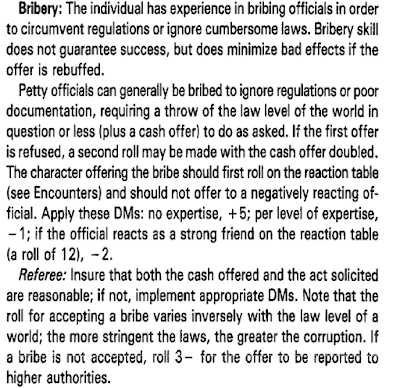 Let's break this down.
Bribery is most likely to be effective on worlds with High Law. This also makes sense because Low Law and No Law worlds don't have much regulation to ignore in the first place. Determine if the official in question is amenable to being bribed. If so, throw LL or less and pay up. It is up to the Referee to decide how much cash is 'reasonable' for the situation. A little guidance would have been nice, but with the myriad of circumstances it might not be possible. If the throw succeeds, the official takes the money, keeps quiet and the PCs have bypassed the law that was bothering them. If not they can try again with more cash, but face also a secret throw from the Referee which may result in the PCs being reported to the cops. Legal Encounter time!


The other circumstance where Bribery skill can come into play is Trade & Speculation. The rules state that Bribery Skill can be employed as a DM on the throw to determine Selling price. If you wish, this can be interpreted as somebody paying a little fee to ensure the deal goes through (aka kickbacks). The amount of the kickback can be assumed as folded into the selling price. This is the only means by which I have ever used Bribery skill, even though I didn't think about it in these terms.


Corporations, Oligarchies, Bureaucracies and Dictatorships (which covers most of them) are the usual suspects of having a large amount of corruption. Government type 0 seems the least likely to suffer from this. The Referee should determine beforehand the level of corruption in any given world's society, or assume that they're all about as bad. If you like gaming by random tables, here's a quick chart with a DM for the Bribery throw:

Or you could check out Stellagama Publishing's work The Space Patrol for a Corruption assessment.

In the real world, there are too many examples of places/countries where bribery & corruption are endemic and a part of life. Unfortunately, there is not an easy way to correlate the Traveller Law Level concept to government behavior in say Venezuela or India. In those places, like it or hate it, slipping some cash to the petty bureaucrat who can grant or deny your request is just 'how things are' and 'part of the system'. With this reality, paying out small bribes to officials would become almost routine, and therefore less an element of adventure.


Is Bribery really dangerous? The rules state there's only a 8% (3- on 2D) chance of a refused bribe turning into a police raid. Most PCs would be willing to assume 8% risk. Look at what they do most of the time! In comparison, trying to bribe the starport's import desk clerk is not dangerous.


An example of Bribery, from “The Ambassadors of Flesh” by Poul Anderson; a Dominic Flandry story:

“Flandry left . . . the boat at the main spaceport, and gave the portmaster a sizable bribe to forget that his vessel was more heavily armed than a civilian craft ought to be.”

Flandry, in this case, was on mission to rescue the Emperor's grand-daughter, and had to avoid the suspicion of the local Noble in case he was in on the plot. He needed his ship to be on-site so he could make a quick escape with the royal hostage. The casual way Anderson mentions the bribery is part of Flandry's established character; a scofflaw who usually has the good of the Empire in mind.


For a typical group of PCs, the same attempt might be made to ensure that their favorite guns make it out of the starport. I wrote a long time ago about Duct Tape Makes You Smart by forcing you to think of ways besides shooting to resolve difficulties. Sneaking guns onto a High Law world does give PCs the edge. With that though is the temptation to take advantage of the disparity of firepower. Hunting animals with fusion guns or strafing villages with gauss rifles from an air/raft is possible, but not the sort of play I want to encourage.


I have over the years repeatedly stated my dislike and disfavor of crime scenarios. I'd rather not play PCs as criminals. But what can be interesting is those more nebulous situations where breaking the law might be morally acceptable.


What about non-petty officials? There are Nobles, Rulers and Imperial Officials out there that could help or hinder the PC's plans. Most petty officials are going to by SOC 6-8. Officials at SOC 11+ can be bribed, but the price tag will be a lot bigger, and the potential for SCANDAL is much worse, making the possible repercussions worse as well. If that Noble or Premier gets busted for taking bribes and committing crimes, then the PCs can expect some heavy retribution coming their way. Referees can use such as recurring enemies. Planetary law enforcement organizations can also spice up the PCs lives. Add a hefty DM to that throw for the bribery attempt to be reported.


Let me give an example in my TU. My players have been planning for some time now to liberate the planet Kemasiik from the control of the dictatorial VanGoff's World. They've met the Governor-General and don't like him, but he doesn't know that yet. He still thinks they're great folks, and on his side.

What if, instead of invading, they decided to try Bribing him into conducting negotiations with the Kemasiik Shadow Government?  They could work out a peaceful settlement by which VGW withdraws troops and sells off local holdings back to the Kemasiiks. Mission accomplished, and nobody gets shot. Wins all around right?

Unless the folks back home find out that the GovGen took bribes. There will be calls for the heads of those who did the bribing, alongside the GovGen himself! The VGW government might chase the PCs across the subsector to satisfy the public outrage. Years of adventure potential there, though . . .

But let's look at this scenario from the typical petty bribery angle.

The GovGen is authorizing repression any groups or movements that try to protest his government's hold on power. This could be an instance where PCs get involved, trying to remove the GovGen, and restore the old government, which is supported by law and custom. If the new regime is wickedly and improperly restricting the rights of the people, is there not a case for bribery, or forgery or smuggling as moral acts, given the goals? Or is this “the ends do not justify the means”? Can the PCs bribe petty officials to achieve smaller goals towards the end of liberty for Kemasiik?

Others might look at the new laws as simply that: laws. Not moral dictates, just 'this is how the people in power want it' statements. A law can be prompted by a moral stance (laws against murder and robbery; it is wrong to kill people, or to take their stuff by force), but not necessarily. Seat belt and other safety laws are not defensible on moral grounds (they transgress upon the person's freedom of choice, even the choice to act foolishly) and are merely public order directives. As such, it is less of or not at all a moral matter to circumvent these laws by means of bribery; a pragmatic act to remove a bothersome obstruction.

As I considered the matter of this skill, I had to chance my stance on it. Bribery is only sometimes a dangerous skill, depending on how the PCs use it. Played RAW, it poses little threat to the PCs, and can simplify their activities in many cases. I still will choose not to use it as a player, but as a Referee, it will start to show up in places, to confound the players and cost the PCs some money when it suits the situation.


Photo credit: from Pixabay
Posted by Robert Weaver at 9:45 AM