Question: How many shots does it take to bring down an elephant?
Answer: Either One, or lots.

In CT the animal creation process is flexible and simple enough to allow a Referee to create new creatures on the fly. The table scales from 1 kg (rats, rabbits) to 44,000 kg (dinosaurs, dragons, whales).
This is an elephant to scale with humans, for comparison. 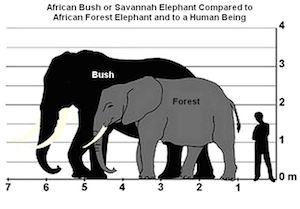 Problem is, it is astonishingly unlikely that a Referee will roll up 'max hit points' with random rolling, at these levels.
A normal Rifle does 3D damage, average 10 points so an 'average' 6K creature would fall after four shots; a 'maximum' creature would need six shots.

Here we are assuming that every shot fired hits for damage; and that the creature is standing still in the open. But a fight in the open means the animal can see the PCs as well. Animals aren't going to stand still and be shot; they will run away or attack.

Compare this, if you will, with this report from the Lewis & Clark expedition:

From https://lewis-clark.org/article/899 “Capt. Clark & Drewyer killed the largest brown bear this evening which we have yet seen. it was a most tremendious looking anamal, and extreemly hard to kill notwithstanding he had five balls through his lungs and five others in various parts he swam more than half the distance across the river to a sandbar & it was at least twenty minutes before he died; he did not attempt to attact, but fled and made the most tremendous roaring from the moment he was shot.”(all spelling errors are original)

It took maybe ten shots to bring down a grizzly bear. This creature is a lot smaller than an elephant, by the way. (200-800 kg) CT official stats for a flintlock rifle list damage as 4D (larger ball size + less velocity = bigger mess of your insides) and that bear had ten of those bullet wounds in it and carried on for more than 20 minutes.


In the film version of The Return of the King, the Riders of Rohan charge into a line of Mumakil, giant elephant-like creatures. As the battle rages, we see scores or hundreds of arrows and spears sticking in the hides of these giants, but they lumber on as if unaffected. I know this is fiction, but it seems to be sensible that small human scale weapons would be less effective against gargantuan foes.

I restate my earlier idea that the hits number after the slash is the point at which the beast can't heal on its own. At that point the Referee should make a morale check for the animal. Make the Attack/Flee throws again. An herbivore may run, but an enraged carnivore/omnivore may fight to the death.

PC parties with gauss rifles can mow down most creatures with impunity in one round. But what if they can't?

Maybe not all animals have the capability to absorb massive damage, but some will! Referees, feel free to max out a big critter, if the PCs deserve a challenge.

Also, keep this in mind: in the CT short adventure Chamax Plague, the titular critters have a special ability. They can absorb the first 12 points of damage in spongy body tissue; hits of less than 12 points are ignored. Clubs, daggers, pistols are near worthless against them. They can't reach the creature's few vital organs.

Large creatures, then, should have the same capacity to soak hits that would be fatal to us smaller humans. There could be thick bony plates, or high bone density. Creatures could have layers of fat and gristle, or thick matted fur, or spongy tissue, or just muscle. All of these protect the creature's vitals, which have to be damaged in order to kill it. Humans can survive pretty gruesome wounds as long as the vitals aren't damaged.

I always thought of animal 'armor' as being their surface body covering, in the same way that humans wear armor as the outer layer. This is not necessarily the case. The armor designation is intended to model an effect, not a method. Animal armor is not common, by the CT Animal tables.
Omnivores & Carnivores both have about a 19% chance of gaining armor (a 2D throw on the Sizes and Weaponry table). Scavengers do better with a 25% chance, and Herbivores do the best with a 33% chance of getting armor. Jack is the most likely unless the result is +6 added to another throw.
The Referee can always decide to assign armor on top of max hits or damage resistance. Any combination of armor, damage soaking, and max hits will make for dangerous and challenging animal encounters.

Hunting Big Game
Now, to give the Travellers a fighting chance, try using this:

Travellers with the Hunting skill get bonuses on Animal Encounter throws. As I mentioned in my post on Hunting skill, it increases the chance of encountering a particular animal, and achieving surprise against it. Add in another benefit. The hunter who makes a throw for 'knowing' a particular animal adds the Hunting skill to weapon skill, when attacking that animal. This reflects familiarity with the creature, and its weak points.
If the to-hit throw exceeds the required number by three, [in Cepheus Engine terms, an Effect of 3+] the weapon automatically does maximum damage for that weapon, against that creature only. Any damage soaking ability is negated by this Effect. This simulates hitting the animal in its weak spots, which would cause more damage. With this rule, a savvy hunter might be able to bring down big game with just one shot!

Do your PCs have a favorite Big Game hunting story?  Share in the comments section. Include stats if you have them!