First let me set the framework for my topic. High Level Play (hereinafter HLP) in Traveller is a particular type of play. It is play that goes beyond a random patron hiring PCs to do a random thing. HLP is about PCs with power.

Many game systems will have obvious mechanical cues when the players engage in HLP. Level based and point based systems are the most obvious and telling systems.

In level-based systems, like D&D, HLP is obvious. What level of fighter or magic-user are you playing? Tenth? Fifteenth? Twentieth? As everyone begins the game at 1st level, the differences from low level to high are very plain.

In point-based systems, like GURPS, HLP is also obvious. Look at how many character points your PC has. GURPS suggests starting out “potential heroes” with 100 points. PCs can increase their CP up to 400, 500 or even more points. The differences in skill and power are extensive. GURPS Supers has characters built on 1,000 points and more – into the realms of the gods!

Dice pool systems, like the eponymous D6 system are also plain. Count the number of dice your PC has in attributes and skills. Anyone who understands probability can tell at what #D rank a character can begin to do the impossible with ease. For those who don't: the highest difficulty number is 30. A PC with 8D in an attribute or skill can beat a 30 1 time in 3. At 9D, it's 2 times out of 3.

Traveller does not have dice pools, or character points, or levels. The central mechanic is “roll 2D6, add modifiers and beat a target number from 1 to 15”. The main modifier is skill level, but this is most commonly 1, sometimes 2 or 3, rarely 4 or better.

One can tally up a PC's total skill levels and call that a measure of high level play, but that's not the way to do it. I point out that Fenton Tukachevski has a grand total of 3 skill levels, and yet he could engage in HLP. See below.
Traveller doesn't allow for much PC stat or skill improvement. Yes, it is possible, in character creation, to get skill-5+ like Enrique Salazar. But he's next to impossible to roll up without fudging the dice. So I don't see high skill levels as the way to HLP. Most skills are useful only in specific areas. Skills don't connote the kind of power that characterizes HLP in other games. Super skill levels are also too hard to get.

Increasing stats in play take Physical Education, using the Experience rules. But there's a problem. The aging throws every four years can wear a PC's physical stats down as fast as they can Experience them up. End result? A draw.

Even a stat at F is not 'super-human' like what one sees in point or level-based systems. Traveller doesn't model persons that way.

It's not a matter of personal weaponry either. Many players would like to have their PC kitted out with Battle Dress and an FGMP-15. Yes, that would make them very powerful . . . but only on a very personal and immediate scale. Remember that both of those are standard issue equipment in the TL-15 Marines. That means that there are, in the setting, tens of thousands of NPCs who have the same gear. Makes it less impressive, doesn't it? Also it does not make the PC so armed unique or special. The PC with armor and guns can control the ground he's standing on, but not much else. Thus, off-the-shelf gear is not the way to HLP. 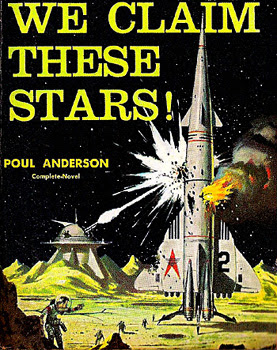 What is the way, then?

All right, it's about time I explain more what HLP is in Traveller. HLP has arrived when the PCs are able to shape and direct events outside of their immediate surroundings. PCs in HLP can change a planet's society, or the flow of trade through the subsector, or influence who becomes the next ruler of a world. HLP is the point when PCs go from being troubleshooters, to being the patrons hiring the troubleshooters. Or the point when their plans and goals become broader and more complex than, as Malcolm Reynolds would have it, “get a job, get paid, keep flying.” Or when the PCs can project their will across space and in time, altering the setting because they have done so.

I have a character that I rolled up several years ago, and have done some solo play with over the years. Devon Christopher Parker, Baron Jacquemont of Glauden is entering into HLP. What's he got that Earl Dumarest hasn't got? Plenty.

Baron Parker's character sheet currently lists his cash assets at MCr 96,000,000. That's the most liquid assets I've ever had in a PC.

He travels aboard the Port Carpenter, his custom retrofitted type-Y. He also owns two Type-C cruisers, Sunstreak and Sideswipe. The three ships are fitted out as an auxiliary squadron to the Glauden Space Patrol in their war with the Drexell Alliance. He has a fourth ship in the repair yards.

Baron Parker has people who work for him: the crews of his ships, the staff at his home office, the household staff on his ancestral land. He also owns property on the homeworld. He's a Baron, and a former politician. He's got standing and influence in his society.

I use the articles Relief for Traveller Nobility and Robe and Blaster to fill in the details of what it means to be a Noble. Parker has several of the advantages that those suggest. The ships, the cash, the employees and the social influence are all setting elements that Parker can use to work out his plans and goals. They are also plot devices that a Referee can use to keep a player's life interesting.

If Glauden is under attack, then so is Baron Parker. Wandering adventurers might fight, or hide, or leave the planet to its fate, but Parker has to stay. It's his world, he's involved with it and it influences him.

If Glauden is under attack, then so is the Society that makes him a VIP. He has a lot staked in this planet continuing down the path he wants it to go. This means he's got to take action to prevent that change of course. This is what High Level Play looks like. Making choices and taking actions that will influence whole worlds.

I mentioned Fenton Tukachevski earlier. Could he also amass a fortune, gain social power, head up an organization?  Have you seen his write-up?  Yes, he's got avenues to that kind of power. Now, his superlative Education will help him out, but it will take a lot more than that. Find some lost treasure ships, do some deals in high-value art, hire a good crew of people to work for him. It's all there.

Not all players want to play at this level. Some prefer to be Captain Reynolds rather than Commander Sinclair. And that is correct, and fun, and imaginative play. There's no game mechanics forcing you toward that end. Neither do players have to slog through 'low-level play' to get to the HLP they want. Right from the outset, PCs can aim at HLP, and concentrate their efforts on getting there.

Traveller supports low- and high-powered characters and campaigns. Choose your own adventure.

Then Go Make it Happen!