Janes' 360 has reported on a Russian design firm which is developing an exoskeleton for infantry. The framework is not an armored suit a la Starship Troopers, but a means for the soldier to carry much more weight than normal.


The exoskeleton "enables a soldier to carry a load of about 50 kg." A modification currently in trials will enable a soldier to "easily carry a general purpose machine gun," in addition to his personal weapon. This would turn every squaddie into his own fire support element.

If it is being developed now, at the equivalent of Traveller TL-8, it could be in general production at TL-9. Book 4 doesn't cover anything like this. That means I get to make it up myself!


Note that this system does not integrate any armor, the soldier is still wearing TL-8 body armor as a separate piece of kit.

I speculate that the next stage of development for this type of equipment in Traveller will not be about carrying more weight (eventually there's got to be a point of 'there's no need to carry more than this') but about improving mobility. This can incorporate contra-grav technology to allow for higher high-jumps, or overall running speed, or reducing apparent weight to cut down on user fatigue. This means soldiers can march faster or march longer than normal.

Suppose then at TL-10 we begin to see this: 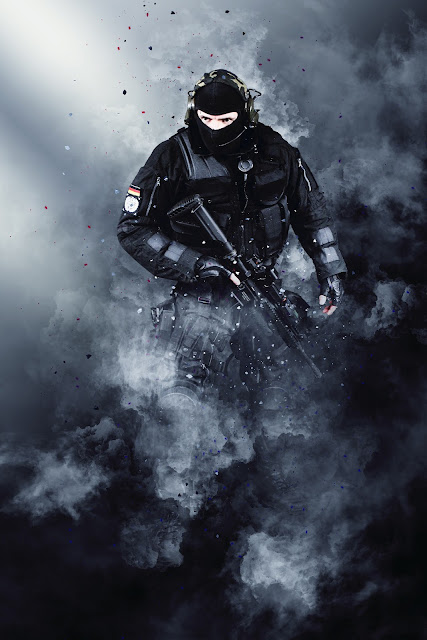 Massing a mere 11 kg, the 33XLK-4 stores compactly in a 0.7m cube. Unfolded it can be donned by the soldier in less than a minute. The integral 22-hour micro-battery provides power to the contra-grav generators, onboard computer and mobility enhancement servos. Running speeds of 20 kph can be sustained for long periods, and horizontal obstacles of up to 3.7 meters can be cleared in a single bound. Vertical obstacles up to 2.2 meters can be vaulted; higher obstacles can be climbed with the aid of the arm-mounted Grip Extenders. Load-bearing capacity is 95 kg, distributed across the CE’s 40 individual attachment points and six standard pouches. Weapon stabilization and laser sighting are also standard. Vital areas are shrouded in Torchmark’s patented Securi-Comp penetration resistant plating; now with IR/UV diffraction coating!

The next thing to consider is the high-tech shield. Will it still be a useful piece of kit in the age of lasers and gauss rifles?

Posted by Robert Weaver at 8:27 AM