Here's a fun optional rule that can liven up your CL game.

At Athletics-3, characters gain the ability to use Parkour for movement around urban areas or aboard ships.

[From Wikipedia] Parkour (French) is a training discipline using movement that developed from military obstacle course training. Practitioners . . . aim to get from one point to another in a complex environment, without assistive equipment and in the fastest and most efficient way possible. Parkour includes running, climbing, swinging, vaulting, jumping, plyometrics, rolling, quadrupedal movement (crawling) and other movements as deemed most suitable for the situation (not to be confused with freerunning). Parkour's development from military training gives it some aspects of a non-combative martial art.

Parkour is an activity that can be practiced alone or with others and is usually carried out in urban spaces, though it can be done anywhere. Parkour involves seeing one's environment in a new way, and imagining the potential for navigating it by movement around, across, through, over and under its features.

A practitioner of Parkour is called a traceur (M) or a traceuse (F).

Some examples of common movements are: 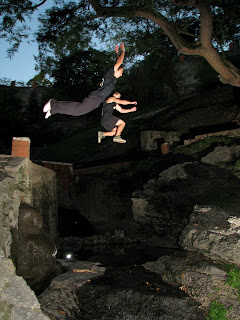 Game Mechanics of Parkour in Cepheus Light
Normal movement is 9m per action. Traceurs can move 12m per action. The Charging action is now extended to 30m.

A traceur can move through crowded areas, or areas with vertical obstacles (fences, tables, railings) as if it were a clear area using Parkour movement. Other characters will be slowed/impeded by the obstacles.

Other characters must throw Athletics for each obstacle as it is encountered. Clearing each obstacle is one Action. Obstacles include things like:
The Referee gets to determine the difficulty of the obstacle. A six foot wide couch is not the same obstacle as a 10 foot high plank fence.

A traceuse being pursued can choose paths that are blocked by obstacles to force the pursuer into making more Athletics rolls.

Athletics skill in Classic Traveller
While I do not favor adding in narrowly-defined skills into CT because of the problem of skill bloat, I think this one will work. It can be easily incorporated without having to alter any of the career skill tables.

During character generation, any time a +1 physical characteristic is rolled, the player may choose instead to take one level of Athletics skill. This gives the player control and a choice. +1 STR means more damage resistance, while the Athletics skill will provide a boost to a variety of physical non-combat throws.

Remember in CT, the Referee determines at what level a characteristic provides a bonus to any given task throw. CT does not have standardized DMs.

Under the Experience rules, if a player chooses the Physical Fitness route, a four-year program produces a +1 level of Athletics, provided the PC has Athletics-1 already. To gain the first level, use the standard skill development rules. A second 4-year program of Athletics makes the skill raise permanent.

In play, the Athletics skill can supply a DM to any throw for a physical activity. This supplements any DMs for having a high physical characteristic. Example:

If your PC has a story of Athletic prowess to brag about, share it in the comments.