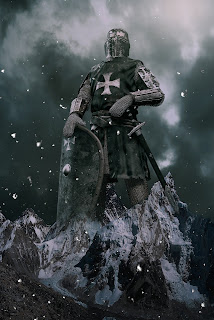 Traveller has, from time to time, taken a little gentle ribbing over the fact that it has rules for spears and swords. This is a game of science fiction adventure in the far future. Well, so what if it does? Sci-fi classics from The Time Machine to The Dumarest Saga and King David's Spaceship had characters use swords and other melee weapons.

So there should also be rules for the use of that natural companion of the sword, the shield.

Shields are the oldest defensive technology of mankind. A shield is a portable barrier, often strapped to the arm or carried by one hand. It protects the bearer against attacks from the front.

Normally you use a shield with a one-handed weapon (blade, club, handgun). If the bearer wishes, he can fit his shield with a weapon rest so that the shield supports long arms (spears, long guns). All attacks with these weapons are at DM -2.  Very high-tech shields may incorporate stabilization and anti-grav to negate this penalty. Imagine heavy weapons carried behind a gun shield!

Shields come in all shapes and various sizes. They can be plain or covered in symbols. Shields can be wood, metal, hides, synthetics or 'force fields'.

In my TU, the TAS Wardens wear a brace on the arm which can, in an instant, expand into a small shield.

Shields provide cover. A shield deflects blows away from the user, rather than stopping blows/shots head on. Soaking a blow from a sword or mace is much harder than pushing it aside.

Most trained fighters will go for center mass. Keeping the shield centered on the body provides cover. Aiming for an extremity to avoid the shield should incur -DMs anyway; it all comes to the same thing. CT combat is not granular enough to deal with aiming for body parts.

How they work:
Shields provide a DM of -2 for small shields and -3 for large shields; against melee attacks only. The bearer can use its DM against as many attacks as he has levels of melee weapon skill.

Any level of HTH weapon skill will cascade to Shield-0. This excludes Brawling, Dagger, and Broadsword. The first two rarely combine with shield use, and the last is a two-handed weapon. 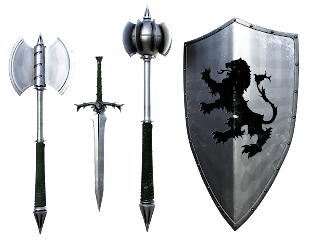 If an attacker throws 12 or “boxcars” against a shield user, the shield breaks and is ruined. The shield does not add a DM in the round that it breaks.

If you're playing Cepheus Light / Sword of Cepheus, use this rule for breaking shields: either a natural 12 or an Effect of 4+ will break a shield. (That's a mighty blow!)

Gunfire is not deflected, at least not until TL-8, and only by shields made for that purpose. Bullet shields provide the same DMs as melee shields. Lower tech shields provide no DM against gunfire. One or two shots that penetrate the shield and damage the bearer will ruin the shield.

Anti-laser [reflec] shields arrive at TL-9 and provide a DM of -3 against lasers only. One or two shots that penetrate the shield and damage the bearer will ruin the shield. Any melee attack against a reflec shield will ruin the reflec surface.

Additional:
There is no Shield-1, either you can use it efficiently or you can't. (see above) Unskilled shield users attack with a DM of -1 (the shield gets in their way). Permit me a literary example.

This is a passage from The Horse and His Boy, one of my favorite books of childhood. At the climax of the novel, Shasta (the protagonist) finds himself in a cavalry battle at the castle of Anvard. He has a shield, but does not know how to use it or his sword. The shield does not help him at all. The Hermit narrates the scene, watching with his magical far-viewer.

“Oh the fool!” groaned the Hermit. “Poor brave little fool. He knows nothing about this work. He's making no use at all of his shield. His whole side's exposed. He hasn't the faintest idea what to do with his sword. Oh, he's remembered it now. He's waving it wildly about – nearly cut his own pony's head off . . . it's been knocked out of his hand now. It's mere murder sending a child into the battle; he can't last five minutes. Duck, you fool – oh, he's down.”


This is what an Unskilled character does in combat. Fear not, Gentle Reader; his Plot Armor saves him from serious injury. In Sword of Cepheus, Melee Combat skill includes shield use.

Game mechanics:
Each (non-weakened) blow that a shield bearer deflects counts as one combat blow. Even with a shield, it takes effort to deflect a hit that could break bones or pierce vitals. Blows from Daggers or Blades are the exception to this rule.

Shield use has a minimum STR of 7+. Below that, carrying the shield counts as a combat blow, each round. The Advantageous STR is 9+, giving a DM +1 to attacking with the shield (a shield bash). Use the cudgels line on the weapon matrix for armor & range DMs.

If you plan to equip your PC with a shield, consider creating a shield emblem or coat of arms! Check out the Coat of Arms Design Studio by Inkwell Ideas.

I found this site on the Web, and used some numbers from it: http://www.pbm.com/~lindahl/cariadoc/shield_and_weapon_weights.html
also this post: https://bxblackrazor.blogspot.com/2011/06/shield-love.html