For my new experiment in using Cepheus Light, I've rolled up a few new characters. I found some character images in Planet Stories v2 # 12 (1945) and thought they looked just about perfect for my new adventurers.


A former Investigator with the Mardahak Bureau of Internal Security. Goes by Robert – calling him 'Bob' will get you a poke to the chin. Quit under a cloud of suspicion, when superiors warned him off investigating the break-in of his girlfriend's University office. His 'unofficial' inquiries ruffled some feathers. 'Evidence' of corruption appeared in his financial records. The charges didn't stick when his supervisor intervened, but Rance chose to take severance and go. Bring that up to him, and that will also get you a poke to the chin.

Former Professor, History of Science at a prestigious Mardahak University. Amateur classical dancer. On-again, off-again girlfriend of Robert Rance. Resident expert on Empire science – or so she thought. When she started digging into genetic alteration experiments, her grants and funding suddenly dried up. Her tenure bid was denied. 'Burglars' raided her offices and stole most of her work and notes – but they didn't get her personal backups. 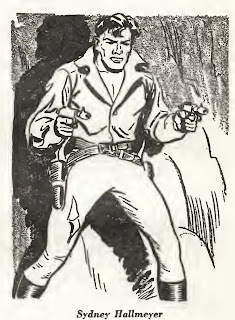 Halls, while scouting around the outer system of Mardahak, discovered an Empire-made survey probe. Upon returning to Mardahak with it, he went to the University to have it studied. Things got weird and political and Rance had Halls arrested. Before long he was released to assist Rance with his investigation. They saved each other’s lives a few times, and now they are pals. Halls is hungry to learn more about the fate of the Empire.


They appeared in two stories from that issue, which so far I haven't read. If you're interested, the stories are:

They are on the trail of information about the Glorious Empire. They can explore ruins and investigate old stories about what it was like in the Glory Days.

Planet Stories issue found in the Internet Archive, which satisfies me as to the Public Domain status of the stories and illustrations therein.
Posted by Robert Weaver at 8:19 AM