Holtzmann's Corridor is considered a border area in my TU, far from the Big Four and their conflicts; but it is an active region full of adventure possibility. Many systems are only lightly populated and lightly travelled; there's lots of exploration still to be done.

The Talaveran Empire (TE) and the Lycosky Trade Protectorate (LTP) are competing for markets for goods and for exclusive shipping rights & routes. The conflict extends to diplomacy, espionage and even covert military action. Stavanger & Lanzhou are in competition with each other, and trying to balance the influence of the Empire and the Protectorate. Dekalb is aggressively pushing its own agenda for regional dominance. They are coming into direct conflict with the Talaverans over Worosha.
Talaveran ships and citizens are all over the Corridor, sometimes acting as official agents of the Empire, other times as free traders/adventurers. Expect to see them on every world. Sometimes they are there to help, sometimes they're bossing the locals around.


The LTP currently limits itself to control of trade lanes but they want to establish regional dominance of their own. 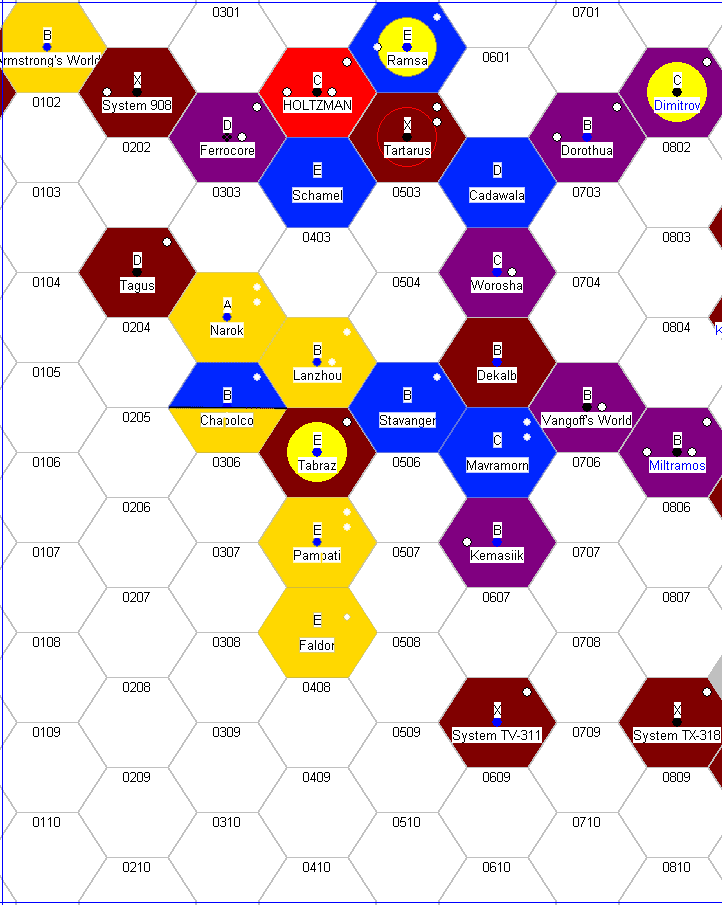 Holtzmann's Corridor has a total of 26 worlds, including four Barren worlds. The total population of the Corridor is 717,000,000. The highest population is 230,000.,000 at Dekalb. The highest Tech Level is D (13) at Lanzhou.  Kemasiik and Miltramos are controlled by Van Goff's World. Worosha is controlled by Dekalb. The Tartarus system consists of a massive black hole.

Coming eventually will be closer looks at the main planets of the Corridor, Lanzhou, Stavanger, Dekalb, Narok and Holtzmann.

Here's some news reports from the Corridor Interplanetary News Net:

Negotiations are ongoing between Kemasiik, Miltramos and several shipping outfits of both the Empire and the Protectorate, to establish a permanent trade route between the two planets, which currently route shipping through VanGoff's World. VGW has expressed its displeasure at the proposed route.

A potential change of government is occurring on Chapolco, as the current chief of state faces a vote of no confidence.

A government building on Narok has been damaged by a terrorist bomb set outside. Reports of damage, fatalities and responsibility are not yet available.

A large-scale building plan has begun on Miltramos, constructing an entirely new city located near to a large palladium deposit.

Pirates continue to harass shipping between Miltramos and VanGoff, with local naval
forces seeming incapable of interdicting the pirates.

Posted by Robert Weaver at 9:00 PM