Downward
An adventure for Traveller. 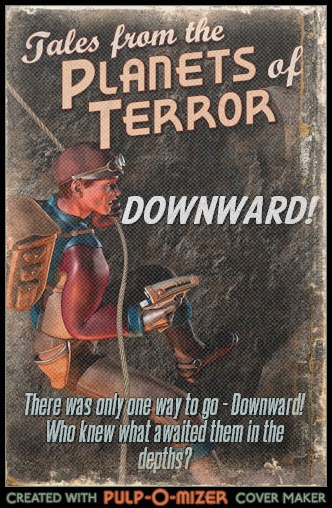 The Zhodani Base is hosting the 76 Patrons adventure writing contest again. This is one of my entries.

Gotylu is a farming world of barely 2 million people. The world is classified as an Amber Zone because of the extremely xenophobic natives. While they are very low-tech, there's a lot of them compared to the small human trade outposts. Because of this fact Gotylu has not been explored very much, with one exception.

Gotylu has one very interesting feature: the Gotylu Chasm, a kilometers-deep naturally occurring hole in the ground. The Chasm is not a canyon; it is a basically vertical shaft of uncertain depth, with nearly a quarter-kilometer diameter on the surface. Its volume and shape are less certain below the surface. Geologists have attempted to study this bizarre phenomenon but often run afoul of the locals and have to make a hasty departure. This has led to the site, while it remains an area of much interest, to be referred to simply as the Hole.
One recent geological team which rapidly evacuated informed Dr. Karl Barrow, the department head for Geography and Exo-geography at Ovdyo State University that in the process of their departure, the central data core that was correlating all of their measurements and sensor data fell into the hole. Dr. Barrow is offering, with the University's approval, transport to and from Gotylu and Cr 50,000 finder's fee for the team that can descend into the Chasm and retrieve the data core. As there will not be a geological survey site on the surface, the hope is that the locals will not notice a small team arriving and infiltrating the Chasm. The Geology department will provide the team with a reliable but used air/raft if the team does not have one of their own. The air/raft is to be returned, it is not part of the payment. Dr. Barrow's department provides maps of Gotylu, and aerial imagery of the Chasm site. A junior geologist can accompany the PCs if they want his expertise.

You can read the rest of the adventure, and leave a comment, at The Zhodani Base.
Posted by Robert Weaver at 4:24 PM