The Oncoming Storm - a 76 Patrons Adventure

An adventure for Traveller 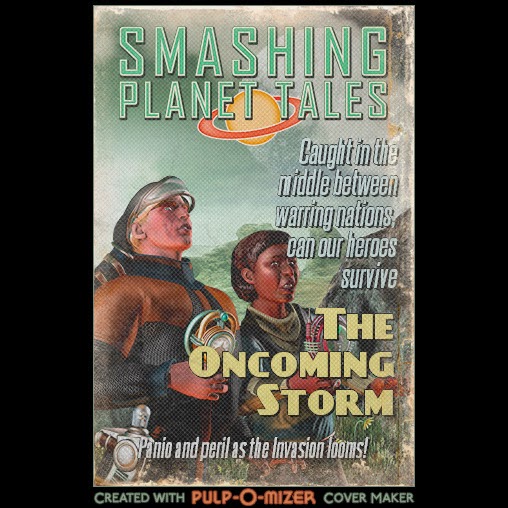 Players Information:
Highbury's two main land masses are separated by fairly wide oceans, except at one point, known as the Channel. In this narrow passage (32 km at nearest point) is found the chain of islands that make up the country of Glostonburgh, home to 2400 souls. Glostonburgh’s economy is based on fishing, and they export fish and aquaculture goods to nations on both continents.

Caxburgh (103 million) on one continent and Breedony (86 million) on the other are gearing up towards a war. Glostonburgh is officially neutral but both sides have a reason to desire control the islands; the largest island has an excellent harbor, and the islands can serve as staging grounds for invading the other country.

Colonel Fasola wants the PCs to investigate the island, looking for military activity by the other side, to use as a pretext and justification for their own occupation. He’s using off-worlders to minimize risk of being recognized as spies. They are given a special military comm channel which can be utilized by their own comms, and two weeks in which to discover any military ships, planes or vehicles, any uniformed soldiers, or other evidence that Breedony has already violated the neutrality. They will have to provide tangible evidence for the Colonel to take to the high command, preferably visual recordings.

The PCs will be given a cover identity as off-world journalists there to investigate the local aquaculture. They can use this guise or create one of their own. They can use their own contra-grav craft if they have one, or Fasola will arrange for one to be available. At the end of two weeks, the PCs should return, with whatever intelligence they’ve been able to gather. Pay can be negotiated based upon PC’s military background and social skills.

You can read the rest of the adventure, and leave a comment at the Zhodani Base.
Posted by Robert Weaver at 5:16 PM