What to do when we encounter a rule that does not 'work' for us?

Recently my older son was rolling up some Traveller characters using the MegaTraveller enhanced generation rules. I remembered that characters in the year-by-year process end up with a lot of skills. As I looked over the results, I mentioned to him that this one character violated the rule that limits total skill levels to the sum of INT & EDU. Needless to say, he was unhappy about this, as it required his character to shed seven skill levels.

Under basic CT character generation, this is rarely a problem. After term 1 the average PC gains 2 skill levels per term, and the skill limit for average characters is 14. Unless the player goes for 6-8 terms they will not run up against this limit. PCs with above average mental stats have a higher limit, and three services have mental stat improvements in the Personal Development table. All the services have INT and EDU bonuses on the Mustering Out tables.

After a PC musters out of service, the Experience rules for CT make it a simple and speedy matter to improve EDU. Any player can take a year and pump up EDU before pursuing skill increases by using the experience rules.

The question my son asked is: why have this rule? It is not often enforced because it often does not need enforcement. The Experience rules both support it and provide a way around it. I answered him that the rule exists for play balance. That's what I really want to talk about here.

To build my case, allow me to use an illustration. Dr. Peter Kreeft is a philosophy professor at Boston College, and a noted Catholic thinker. He gave a lecture some years ago defending the Church of Rome's insistence on an exclusively male priesthood. It is a good well reasoned lecture, and I mention it because part of his defense of the priesthood makes a good point that can apply to gaming as well.

Kreeft's point was this: If you are walking through a field and you come upon a fence; and you don't know who put the fence there or why, the really stupid thing to do is to tear the fence down. The sensible thing to do is leave the fence in place, then go and find out why it's there. The only people, he said, who have the right to tear down the fence are the ones who understand why it is there. This is usually the people who put it there.

Rules in RPGs are fences- they restrict, limit and shape the game. Many gamers use 'house rules' to eliminate or modify a rule that they don't like or find gets in the way, like the skill limit rule I mentioned to my son. The board game Monopoly is almost as famous for its many house rules as it is for its game play and long history.

Any serious player of Monopoly will tell you that most house rules, especially the 'free money on Free Parking' rule unbalances the game and make it take longer to finish. You can win by-the-book Monopoly in two hours. Cash injections make it more difficult to force opponents into bankruptcy, which is how you win. Once I learned this, I refused to play the game with house rules.

On blogs & forums I have read experienced players criticize new players (newbies) for complaining about rules that they do not like and wanting to change the rules. The criticism of this attitude centers on the fact that the newbies don't understand why the rule is the way it is. They also don't see the long-term effects of changing the rule. In the real world, this is known as the Law of Unintended Consequences.

Another rule from CT which exists to maintain play balance is the survival rule in character generation. Every gamer knows, if they know nothing else about Classic Traveller, that it is the game where your character can die before the game begins. And jokes abound about this. Well yeah, it is true (see Omer Joel's defense of Dying in Character Generation) but the jokers often fail to grasp or even ask why the rule is there. 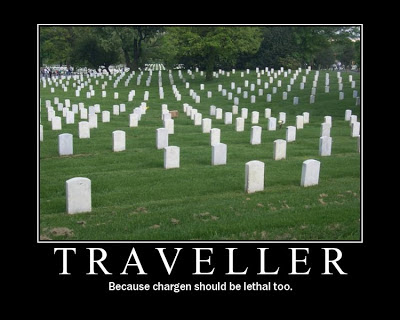 How does the skill limit rule keep Traveller balanced?

When I say balanced, I mean balancing competence and risk. Traveller's core dice mechanic is 'roll 2D6, add modifiers and beat a target number'. It is simple and it works, but the spread of result numbers on 2D6 is not very wide, so too many modifiers can mean PCs are always successful. Automatic success means no (or less) fun. There's no excitement as the dice rolling becomes pro forma confirmation of an already known outcome. At the other end of this problem, to compensate for high DMs, the referee may set target numbers very high (11+, 13+, 15+) which make them impossible for 'average' skilled characters. Automatic failure means no (or less) fun.

The survival rule keeps skill levels at that 'challenging but not impossible' range by discouraging players from going for 8-10 terms to get super high skill levels. If a player chooses to do this, they accept the risk of losing the character; or having a very physically limited character courtesy of another balancing rule, the aging rule. The skill maximum rules serves this balance as well. It reflects a bit of reality, that one must be of superior intelligence and education to have professional levels of skill in multiple areas. A PC may have a skill-5 on his resume, but it is probably at the cost of not having a wide pool of skill-1s.

As I explained while discussing Mr.Tukachevski, skill level one indicates employable competence in an area, the equivalent of a trade school or military service school. It is skill-0 that is the result of the weekend seminar or self-directed reading course. Depending on the skill description, even one level of skill can give a healthy bonus towards task success.

Classic Traveller is modeled on a body of science fiction literature. This has been discussed in enough places that I do not need to elaborate here. One of the things that characterizes most of that literature is its very human scale. The heroes and protagonists are intelligent, brave, talented and resourceful, but they are still human. Three of these traits are in the realms of the players, where they should be. They are not superheroes or demi-gods. For the one, play any of the games based on DC or Marvel comics, and for the other, play Dungeons & Dragons. I'm not cracking on either of those genres, I have played both and enjoyed them. I am saying that it is a part of the game's setting for the PCs to be normal people. So Traveller PCs are human as well, even when playing aliens. There is plenty of high technology that can give PCs power, but that is balanced by the fact that opponent NPC have the same access to technology. The way to deal with TL-15 Marines wearing Battle Dress with Grav belts and Fusion guns is to outwit or outmaneuver them, and that is also in the realm of the players, where it should be.

Coming back around to rules we do not like; if there is a rule in the books that is keeping you from doing something you think would be cool, talk with the referee. Ask on a forum or a blog why the rule is there, and what effects changing the rule will have. Maybe you'll learn to accept the rule as it is, or the consequences of changing it will be too much. If you still want to change, and the referee is willing, work out a trade-off. Get around the restrictive rule, but accept a penalty/restriction/loss somewhere else. Also keep in mind that when you create a house rule, you limit your ability to interact with players of that game in other game groups or at conventions. For every rule break you want for your PC, the referee can feel free to break that rule for NPCs – all of them. You want your PC with average INT & EDU to have multiple Skill-5s? Your opponents will probably become much more skilled in response. Because a fun game is one where the players have to take chances, use their wits and where the PCs have a chance of failure. The potential for failure creates tension, and tension is dramatic. It is what makes the achievement of a goal uncertain, and make the goal's attainment so satisfying.