Patron: Initially the PCs are hired by a business agent who goes to lengths to conceal his (her?) identity. On Sainte Foy, the PCs report to the buyer, Count Ibraim Radge, a member of the Primacy, the local ruling elite.

Mission: The PCs are to act as tenders/minders for a cargo shipment of great importance intended for the capital city of Villefoix. They must accompany the shipment both through space and across the world's surface to its destination.

Complications: The secrecy surrounding the shipment will surely arouse suspicions among the PCs – giving the referee plenty of room to play with their suspicion (or paranoia). The cargo is large, bulky and has special handling requirements – it is heavy but fragile at the same time. The starport is a long way from the ultimate destination, requiring an overland trip by train. 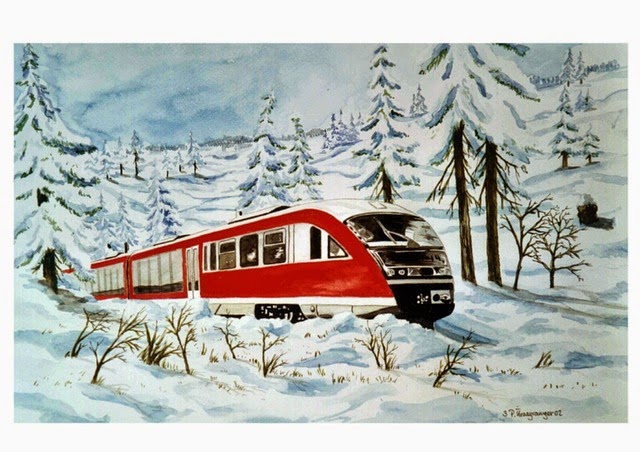 Sainte Foy is wet-concrete-bare-bench-cold. Hope the PCs packed their thermal gear! The trip, of course, will not be uneventful; there are those who wish to prevent the shipment from reaching its destination and don't mind using force to succeed. It seems this secret delivery is not so secret after all.

Payoff: The shipment is valued at 4 million credits, of which the PCs will (as a group) get 10%. Count Radge will offer additional reward for the overland trek.

Strong Points: This is a simple 'journey from A to B' scenario, that becomes a complicated survival scenario, nicely ramping up the drama. The PCs face big, big risks to win their big, big reward. The early stages of this adventures are dull, and can be summarized by the referee for players who want to get right to the action. This is not actually a mystery adventure, the PCs do not need to unravel all the 'whos' and 'whys' to survive and succeed; but the referee can play up the mystery aspect of the early stages, to keep the players interested and paying attention so they don't miss any significant cues.

Weak Points: I find it odd that the starport and the capital city of this export-based mining world are so far apart. Could it be that way just to necessitate an overland journey? The most noticeable weak point of this adventure is hard to explain without spoilers. In rough terms, it has to do with the motivation for the antagonist force that presents itself in the adventure. This group is opposed to a particular practice of the Primacy, which the adventure explains and makes a reasonable case for the Primacy acting as they do. By doing some math, I calculated that this behavior affects far less than one percent of the local populace in a meaningful way. So while it is dramatic on the surface, once you study it, the antagonist group is really fretting over trifles. This realization does not undermine the adventure, it just needs some more explanation.

What I'd change: I would develop the rationale & goals of the antagonist group further; the given explanation for their opposition would be a rhetorical cover for their real motivation, which is something more mundane and political that would not play well with the locals. There is a complication/plot thread mentioned in the epilogue that I would leave out of the adventure. If the PCs do well in this adventure, they will have gained some significant contacts with the Primacy, which I could use as lead-ins to further adventures. Also, the opponents they face in the adventure could return on a vendetta.

In My Traveller Universe: This adventure should be set on an Independent world, but one that is not too far from the galactic mainstream. I think the character of Sainte Foy matches Dorgenta (5 Worlds-America 0501) well enough – it's even an Amber Zone world.

Map: a portion of Sainte Foy, between Gateway Starport and Villefoix.

This map was created by me, using Hexographer (www.hexographer.com) It may be used or edited without restriction.
Posted by Robert Weaver at 10:23 PM