O Give Me a Home - Acquiring land in Traveller

I was wondering recently. What does it cost in Traveller to own land? The concept is not addressed in The Traveller Book. The underlying assumption of PCs forever on the move explains this absence. When the Third Imperium came along, the galaxy gained a social structure, and introduced the possibility of PCs owning land.

Land ownership can integrate with the concept of Traveller. It means that the wandering PCs are not aimless. They have a place to return to. Everyone is from somewhere. For most folk, where someone comes from is a major factor in their identity and sense of self. Where do I belong? is not a frivolous question.

I've mentioned before in Character Experience and Development that PCs might gain land as a reward. If the PCs do some thrilling heroics and save the town/city/planet, that piece of prime real estate makes sense. You've endeared yourself to the local populace. They want you to feel that you're a part of them now, by owning part of where they live. 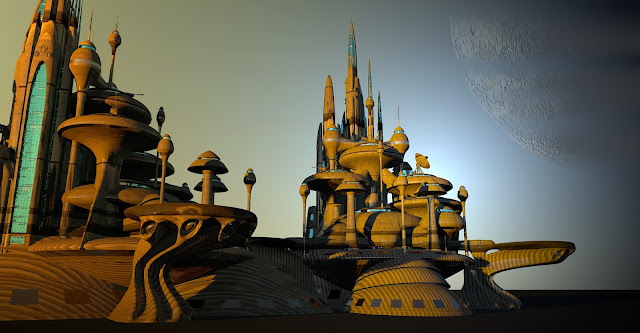 Once the homestead is official, if the PCs get involved with that, the property should start paying for itself. Land is a resource for making money. Grow food, extract resources and then sell it, or rent it out to someone who does those things. Or rent it out as living space. Referees can make adventures out of any of these options.

From the Dragon article The Traveller Politician: An Estate is worth a sale price of 2D or 3D x 10,000 Cr. It generates 1Dx10% of that value in income annually, and costs 1Dx10% in maintenance every 4 years. Split that into 4 equal annual costs. An estate manager with Admin skill could increase revenue and decrease maintenance costs.

As a base figure, let us say that each 10,000 Cr worth of land is 1 square kilometer. Once the PCs establish their Estate, they can plan to acquire more land.


Acquiring more land beyond the initial grant is a more involved matter. It should be an adventure, not a die roll or a simple cash transaction like buying speculative cargo. Let the PCs explore whatever main or subordinate world that they want to stake a claim on.

Is the land under consideration for sale by another party, or is it uninhabited? With the one, there will be NPC interactions to handle. With the other there should be animal encounters and travel. The PCs may have to travel far to find land that suits their interests and plans. I will discuss establishing ownership of uninhabited land in another post.

The Traveller Politician article gives a sale price for land. I suspect that is a lowball figure, to avoid giving the PCs too much cash too fast. Acquiring new land could cost 20,000 or 50,000 or more per square kilometer. Adjust the cost for things like planetary population and tech level. If the parcel of land is that valuable, there might be other parties interested in it. Rivals may resort to dirty tricks to get it!

Land that’s for sale might already have development in some way – a farm, a mine, a run-down hotel, a spaceport! Improvements will drive the price up and invite competition. The JTAS article High Finance (which I referenced here) has guidance for raising cash. Could the PCs end up in a bidding war for the property? Sure, if it leads to adventure, rushing to raise the necessary cash before the deal falls through.

A disappointed rival buyer can become an opponent or an enemy. Beaten to the punch, the rival could launch a criminal campaign to undermine the PCs. A desperate enemy might hire other Travellers or mercenaries to force the PCs off the land!

The PCs' new neighbors, if any, are also avenues for adventure. Check out the Gregory Peck epic western The Big Country for ideas of landowners in conflict. Will the PCs resolve matters with social skills? They can try, but it may well turn into fisticuffs or shootouts!

Becoming landowners can be the PCs entrance into High Level Play. Whether it does or not, it should absolutely be a source for adventure.

Posted by Robert Weaver at 9:23 AM