A Mission on Mithril Play Report

While my elder son was home on leave from the Air Force (Flyers, term 1) we got in a little Traveller. With his time at home limited, we opted for a standalone adventure rather than launching a new campaign. What better time to go ad fontes (back to the sources)? At their request, I pulled down Mission on Mithril. 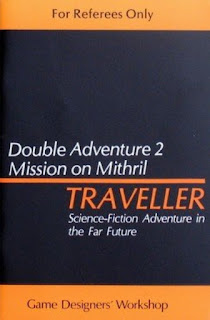 MoM may seem like a very 'linear' adventure. On inspection it has enough variety & flexibility that you could run it over and over, with a different adventure each time.

The general layout of the adventure is this: a small Scout ship crew are stranded on Mithril in the Sword Worlds. Mithril is cold, as in arctic cold, and almost uninhabited. The Class E starport does not draw much traffic, so the chance of beneficial starship encounters is low.

Their ship has a malfunction which prevents them from jumping out-system.

The local port authority has a replacement part, but wants some work done in exchange. The SW Government wants a more extensive survey of the planet done from planetside. There are three unexplained phenomena that satellites detected from orbit. The PCs must travel to each location and determine the nature of what is there, and its importance to the planet's development. Return with the data, get the repair and the PCs can fly away.

I've had this adventure since 1982. It came with Starter Traveller, which I bought that year. I know this adventure has its weaknesses. The three phenomena the PCs must investigate range from a mild curiosity to a lazy, tedious answer. The setup is forced. It would be very difficult to persuade the PCs to travel to Mithril for this mission. As written there is little that a Referee could incorporate into an existing campaign. There is much danger, and little possibility for gain. If they complete the adventure, they may be no better off than when they began, except for the repair job. Sometimes adventures are like that!

We intended to play this as a one-shot. As such, it did not seem important to concoct a better explanation of how the PCs get stuck with this mission. I ran with the setup, but decided to re-write the phenomena. Can't say how, my sons haven't finished the adventure yet. Truth is, that the three things could be anything the Referee can devise. Get wild!

This is the first time I've actually run and refereed this adventure. We played for two hours after creating several characters to find ones they liked, and that conformed to the adventure (we all knew what it was about). In that brief window, a whole lot happened, and they had not even made it to the first checkpoint!

They got lucky early on with an animal encounter, to resupply themselves with meat. They had 5D kilos (18) of prepared food in the ATV when they took off, and burned through half of it by the time we stopped play. The animals that they bagged were neither very big nor very meaty. (throw 1D, multiply by 5% of the animal's mass for edible parts, they threw a 1) At least it increased their supply. If this takes as long as it seems it will, they must go hunting again or face starvation.

The ATV's power plant is also a resource management challenge. The fusion power plant needs water, and it burns “power points” to keep the heaters on and to move the vehicle. Like the health bar in an arcade game, it is always ticking downwards towards zero. Acquiring fuel is not a problem on a planet of ice and snow, but what if it loses power overnight while they're asleep? Average temp on Mithril is -10 Celsius. Hello frostbite!

Highlight of the adventure so far? They took to the sea for a 'shortcut' to the first goal. While the PC who did not have ATV skill (but did have JoT) was at the helm, I rolled on the Sea Encounters for the MAELSTROM event. They got very close to being sucked under and cast adrift in a random direction. In fact the driving throw to escape the maelstrom was 12+ (very hard) and the dice came up to only 11.

Because I asked, they argued to justify another DM +1. I always encourage players to think about the situation, and get creative with “how would your PC solve this problem?” In the end I allowed the extra +1 which saved them from a watery fate. They squeaked past the whirlpool and made it to a nearby island. Panting with excitement they drove the ATV up onto the beach, and we called a halt to play.

The great part is that I filed away the adventure folio, my notes and the character sheets. The next time he's home on leave we can pick up exactly where we stopped. My biggest challenge with it was the map. I lost the 8.5 x 11 color map from the Starter set, and the B&W reprint I have is too small to read the terrain well. I wonder if GDW sells replacement maps?

I said before this adventure has lots of replay value. Let the players roll up new characters each time, and change the details of the phenomena. It will present new challenges upon replay. The size and composition of the PCs group will change, they may go a different direction (hey, let's head west across the sea first this time . . .) and the terrain events provide enough randomness to keep it challenging.

How will they handle serious PC wounding? What about damage to the ATV? What if they find no animals and food runs low? Even the weather can fluctuate each time, and cause different problems.

MoM is not by any means a perfect, or my favorite adventure, but it was greatly satisfying to finally run it. Mongoose Publishing re-wrote and updated the adventure for their Traveller rules set. My son tells me that it is different in approach, but still a worthy adventure.

Posted by Robert Weaver at 4:24 PM