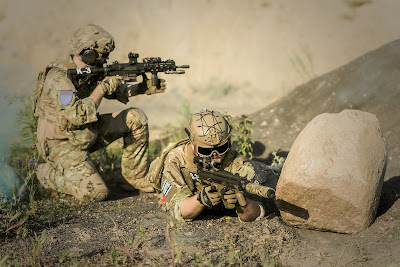 Failure to read the terrain of the encounter

PCs who stand up in the open during a firefight die. PCs who don't use their brains in a fight die. Enemies with surprise get at least one round to attack unopposed, and that might be all they need to take out the PCs.

How to avoid this: Mitigate surprise attacks with Leader, Tactics skill (I also include Recon). Utilize cover – it is a life saver. Control the range of the encounter by movement, don't just go to ground. Use Escape & Avoidance to not even have the fights you don't want to have. Use the Reaction table to Negotiate with opponents before the shooting starts.

Bringing a knife to a gunfight

A group with all handguns and blades is at the mercy of enemies with longer-ranged weapons. Blades are useless at Medium range. Laser weapons do very poorly against Reflec and Ablat. Most weapons do poorly against Battle Dress.

How to avoid this: All PCs should have some weapon, and prefer the weapons they have skill in. Remember the Weapon Mastery ability means they can use anything, and PCs should take the trade-off of expertise for tactical application. Have a mix of weapons available, and plan to bring the weapons best suited for the fight you're about to face. Position PCs to support long range shooters. Everyone carry a backup/close-in weapon.

The more enemy fighters you face, the more attacks there are incoming. Many NPCs will be just as skilled as the PCs in their primary weapon. Every enemy fighter with a weapon is a threat. The rule on automatic fire says the firer gets two to-hit throws per attack. This is twice the damage potential. Plus there is the group hits by auto-fire rule, that auto-fire can affect several PCs at once. Shotguns can also do this. Lots of animals are capable of speeds greater than humans (3+) which increases their threat, as they can move to Close range in 1-2 rounds. Pack animals multiply this threat. Animals can easily be larger than humans, and as such harder to bring down.

How to avoid this: Use teamwork to protect each other, and aid downed comrades. Spread out. Have some auto-fire weapons on your side too. Avoid fights at worse than 1:1 odds.

How to avoid this: well, you can't. But you can prioritize attacks to put your biggest guns against the heaviest armor. Lasers against anything, shotguns against reflec. Again, consider escape and negotiation to resolve the encounter.

My analysis is aimed at the players rather than at the Referee, as Rick's was. Yes, the Ref should not pit an Exploration team of PCs against a platoon of Marines in Battle Dress. That's just unfair. PCs should have a chance to survive. Unless they''re stupid. Traveller is unforgiving of players who expect to wear Plot Armor.

Posted by Robert Weaver at 3:25 PM