Delusions of Grandeur - The Dreadful Doctor

Here is the next entry in my irregular series of NPCs who can confound, obstruct and annoy the heck out of the PCs. 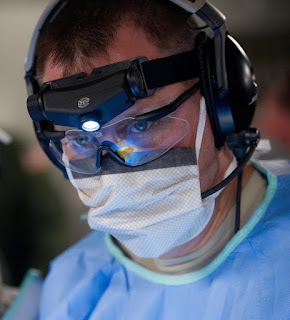 Dr. Califrax is the chief/only physician on the colony world of Somerset, [F-353393-9] a subordinate world of Mavramorn (Holtzmanns Corridor 0605).

Dr. Califrax has delusions of grandeur. He believes that he is wise, intelligent, super-competent and generous. The community around him tells him so. His medical skill is accurate; he is a competent physician. The problem is that he needs everyone to recognize it, and needs constant affirmation of his self-image. His clinic staff consists of several nurses (Medical-2) and orderlies (Medical-1) chosen more for their adoration of the doctor than for medical competence.
He is unaware that he over-diagnoses patients, claiming they are far more ill than they actually are. He then persuades the patient that only he can save them. He prescribes expensive medications and surgeries. He owns the only pharmacy so he makes quite a tidy profit, twice. The money also contributes to his delusion.

People of the settlement either adore or dislike him. With so little other medical advice at hand, he remains accepted. Those who like him come near to worshiping him. Those who are skeptics have learned to keep it to themselves.

He has performed many unnecessary surgeries, including amputations and organ removals. The doctor's staff pressures patients to be grateful to be alive, and downplay the effects of missing limbs or organs. He is a skilled surgeon so deaths on the table are rare. When someone does die, he remains blameless. He explains that the disease or condition was 'the most severe he'd ever heard of'. Dr. Califrax always positions himself as the helpful hardworking doctor doing 'everything he can'.

Non-medical people have questioned him before. He responded with venom, leveraging his reputation and social position to silence the critics.  On rare occasions Dr. Califrax has hired thugs to assault people who have questioned him. He then dosed the thugs with mind-altering drugs so that they could not reveal who hired them.

Other medical PCs are not welcome in Dr. Califrax's office, except as patients. In other settings, he will be Mister Congeniality, and talk at length about his experience. All the while he will try to persuade the medical PC that he's the superior physician. He will trash talk other (absent) medical people. For example, the TAS Mercy Ships are terrible, unsupervised, unqualified lone wolves. The TAS Wardens are dangerous loose cannons.

The doctor should not be the main villain of an adventure on Somerset, a low-gravity world with a thin atmosphere and arid climate. The referee should introduce him as an important NPC in the setting. If anything exciting or important happens while the PCs are around, Dr. Califrax will make things worse by inserting himself so that he can look important.

Characters with Medical skill should be the first to notice the good doctors' tendency to overstate medical necessity. The urgency and severity of the doctor's reaction depends on they respond to him. If the PCs keep it to themselves and avoid him, he will use 'pressure sales' tactics to persuade them to use his services. If they meet with him in private and question his diagnoses, he will become hostile and show them out. He will start a smear campaign to discredit the group and their objections.

If they confront him before witnesses outside of his practice, it's war. He will use all his social power to harass and drive off those who do not support his delusion. Dr. Califrax can cause the PCs a lot of trouble, without a direct confrontation.


Photo is public domain, courtesy of www.pixabay.com
Posted by Robert Weaver at 11:02 AM