The Church in the Corridor

Most of the churches in the Corridor are under the jurisdiction of the Patriarch of Moscow who has his See on Talavera. The relationship between the Church and the Empire is as complex in the Corridor as it is anywhere else.

The Metropolitan of the Corridor is on Chapolco. The other worlds have Planetary Bishops, the lower population worlds sometimes share a bishop with another State. 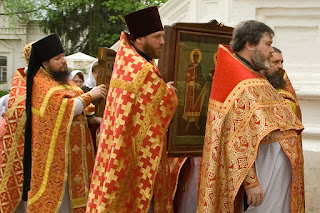 From the Imperial perspective, the clergy rank socially as follows:

On worlds that are less favorable to religion the social position of priests will be lower: Neutral (-1), passively (-2) or actively (-4) anti-religious. Militantly anti-religious worlds will assign all religious persons to SOC 4 or less.


The Church in Corridor society

Special: Tabraz is militantly religious, but only towards Haifazite Islam. The Church is forbidden and non-Haifazites are harshly persecuted.

PCs visiting the four anti-religious worlds will be advised as visitors to keep their religious persuasions to themselves, to not seek out fellow believers or churches on the planet, and most especially to not attempt to proselytize the locals.

Adventurers may be approached by patrons for any of the following missions:

Posted by Robert Weaver at 9:25 AM