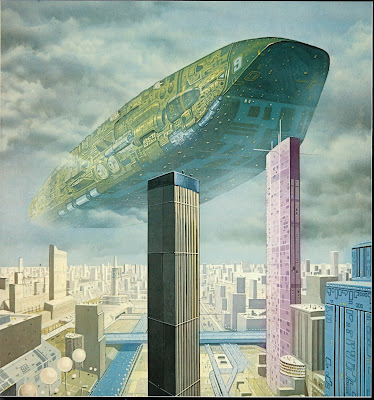 My answer to his questions is that D&D is a Power Fantasy. To sustain the fantasy, there must be ever higher levels of Power available. Because leveling is mechanistic, it is easy to grasp, and can easily become a substitute within the game for any other goals.

Traveller, without a leveling system, does not have that issue. Players must set in-game goals for their PCs because there are no meta-game goals to set. By the end of character creation, you've already Leveled Up several times. Traveller adventurers are veterans from the get-go.

It should be obvious that the author believes that the game would still be playable and enjoyable without the leveling-up aspect. Traveller concurs.

The author goes on to say:

I'm not interested in players whose attention span depends upon advancement.
. . .
I run a world. I place things in it, I introduce the people and show the pathways. I provide the hooks and manage the strange happenstance that drives tension, hilarity and drama. I fill the coffers that pour out when the coffers are found and I put the monsters and other things between the players and coffers when necessary.

But I guarantee nothing. Zilch. The party misjudges the enemy or rolls a string of bad numbers and that is going to be the ball game. Three strikes, that is all anyone gets, and yes, get ready because the pitches are going to be overhand and as hard as I can throw. There ain't no packed lunch, there ain't no sympathy in the big city, there ain't no sanity clause and nobody rides for free.

That is how I would like to play Traveller. These days my game group is playing super heroes in another system. Maybe some day I'll get to do this.

Posted by Robert Weaver at 2:35 PM