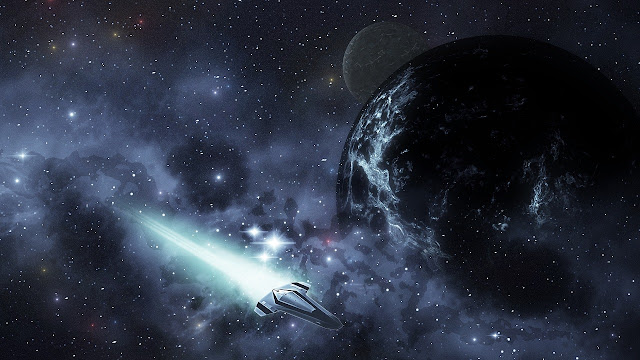 I recently read Edmond Hamilton's short story Sargasso of Space (Thrilling Wonder Stories, 1934) which featured a wreck-pile in space. The setup is that there is an area out past Saturn where none of the planets' gravity fields have influence. In this null space, wrecked or abandoned spaceships have collected like a proto-planet. The protagonists of the story make an unplanned stop in the wreck-pile after a shipboard malfunction sets them adrift.

The short story goes in one specific direction with this, and that's fine. It was an enjoyable short story, but literature is not my purpose today. Like a lot of stories from that era, by today's standards it may seem pretty cliche, but it was the potential of the wreck-pile as a location that got me to thinking.

Such a wreck-pile would also over time draw in other space debris, from dust to asteroid and comet bits and even gases. The dust & debris would film over the hulls of ships and maybe even begin to bury them. In the 3I or my Church & Empire setting, any solar system might have such an accumulation of destroyed ships, collected over the centuries of space flight. They could appear in open space between outer planets with widely separated orbits, or at the Trojan points of gas giants. Whatever its location, it should be at a point that is away from the regular traffic lanes for that system.

If it were closer to regular lanes, it would be marked as a navigational hazard and either cleared away or marked with beacons. It may also be visited by the Space Patrol, which cuts down on a lot of adventure potential. And that's what I wanted to talk about – adventures.

Such an asteroid/planetoid would be an outstanding location for adventures. The PCs might find themselves there on purpose, but more likely they end up there after some mishap. This puts them in a tense situation right away, as the wreck-pile is almost certainly not a long-term habitation option. The PCs must find the means to get away and back to a planet, or die. What might they find?

There will be pockets of air, possibly fuel tanks still full, supplies and other salable items free for the taking. Enterprising Travellers might even find something that they can repair and fly away with. The ships can become “dungeons” to explore, with traps, hazards and maybe even survivors!
More adventure ideas:
What else could happen at such a place? Share your ideas in the comments.

Another thought: Class D ports on down don't have any repair facilities. What happens to a ship that for whatever reason is in a system with a Class D- port, and it can't jump out?

Ships might be left behind there after crashing, suffering combat damage, passing annual maintenance, experiencing misjumps, or the suffering the death of the owner/crew on-planet. Diseases, wars or adventuring mishaps could result in TPKs and abandoned ships. Nefarious governments (or government officials) might impound or seize ships for ransoms, as punishment for accusations of piracy, because they want to build a navy or any excuse the Referee devises to keep the Travellers on planet.

It might be that the ship just stays there, unclaimed or might be sold off to a scrap yard. Other Travellers could come by and buy used parts at lower price because they have to tear it out of the other ship themselves. The local government might claim it and hire Travellers to work as repair crews to put the ship into serviceable condition as government property. Maybe it just rusts away and becomes a dangerous derelict.  Any of these sound like a recipe for adventure; the possibility of reward and the presence of risk.

Posted by Robert Weaver at 6:57 PM