Variant Psionics for the Cepheus Engine – A review 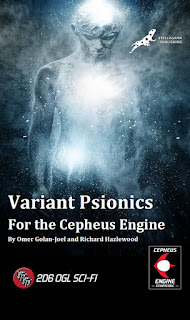 Recently Stellagama Publishing released their Variant Psionics rules supplement, available from DriveThruRPG.com. Full disclosure, I am listed in the credits as a Consultant. I suggested a few ideas for the book, but I earn no royalties. As it says on the tin, this is written for the CE rules set, but with only minor tweaking, these rules will work for Classic Traveller as well. Which is good news for me, still being a CT kind of guy.

What does the VP book offer? Let's have a look, shall we?

The first section explains how to fit psionics into any CE setting. How often do psionics appear? More importantly, referees now have three possible societal responses to the existence of psionics: friendly, neutral and hostile. In CT, the assumption even before the Third Imperium or the Zhodani Consulate, was that psionics would face a negative reaction.

Next we have details on how Psionics are a part of Stellagama's These Stars are Ours! campaign setting. Most psionics end up working for the government, but not necessarily as spies or secret police. Still, Terrans' attitude towards psionics leans toward the negative. Life for a government psion will not be easy.

The middle of the book contains the detailed rules for the available psionic abilities. All the talents from CE (and CT) are here: Awareness, Telepathy, Clairvoyance, Teleportation, Telekinesis. Each talents has several powers associated with it. The Variant part is the new powers that have been introduced for most talents. Clairvoyance still has only the powers listed in the CE rules. Some of the standout new powers are:

Here I have a few things that I would change. The Telepathic power Life Detection has a maximum range of Short (12m). That's well within visual range, making it not really useful. Extend it to Medium or Long. The Choke power has a range of Close; so a psionic has to almost be near enough to physically choke the victim. Again, greater range should be allowed. I do not understand the point of the Memory Block power, so I doubt I would include it.

In the Telepathy table the fear power is listed as Emotion, but in the descriptive text it is Fear. I really like the table of Fear effects, and I am swiping it for my games – those Frightening Animal Encounters should cause the PCs some hesitation.

I also like the rule that telepathy allows for cross-language communication, at an increased cost in Psi strength. Another pleasant surprise is the rule for telepathic Shields being extended to cover nearby non-psionics.

I would like to see more unusual or 'special' powers such as pyro/cryokinesis, precognition, illusions or atomic manipulation. Still, for the enterprising referee the rules given are enough to define such powers. Too much power can unbalance a game or setting. For me, the fact that all characters are vulnerable to ordinary weapons is enough to allay fears of out-of-control psionics.

A welcome section on psionic technology comes next. I say welcome because in my own TU I have been experimenting with crossing technology with psi power. The psionic shield (personal) from CE/CT is available; here we are introduced to room- and vehicle-scale shields. Telepaths now need to be wary of their targets having a Psi Trap backlashing at them! There are other devices described as well; some of which are expensive. The PCs might have an adventure just acquiring them.

The optional Psion career path comes next. The career format is the same as with other CE careers. Skills, ranks, events, mishaps are all there, including the possibility of going to prison for psionic crime!

The last section explains how a psionic character can improve their talents and powers in the game, as opposed to during character creation. These rules are copied from Classic Traveller's Experience rules, which I use a lot. They are simple and easy to use. Good choice!

Variant Psionics is available as a 32-page PDF from DTRPG. At only $3.49 it's easy on the gaming budget, and well worth the price. Check it out!
Posted by Robert Weaver at 11:32 AM