I wrote this adventure last year as a contest entry, and shared a snippet of it on my blog. Now I've edited it, and fit it into my TU, in Holtzmann's Corridor.

Player's Information:
The PC's are contacted by a business factor on Dekalb (TL-9), looking for a small team to infiltrate a mansion. The Board of Directors of the Intertec Corporation, LLC, have a problem. The CEO of the corporation, Mr. Hanse Cyris has been out of touch for weeks, and hasn't been seen in person in months. He was always reclusive, but this is the longest he's ever been gone. The corporation is facing a financial crisis occasioned by the CEO's absence & non-leadership. The Board has voted Mr. Cyris out, but the local law requires that he be present at the company offices to handle the transfer of power.

Mr. Cyris' last known whereabouts is his mansion at the edge of the city, which sits in a secured, walled compound. The PCs are hired to deliver the CEO to the company offices. They are authorized, as contract employees, to employ all necessary force to secure Mr. Cyris unharmed and bring him to the offices. The Board provides the group with a dossier on the Mr. Cyris, so he can be positively identified when they find him. The mansion is technically corporation property so they are not trespassing. The Board requests that the building itself be damaged as little as possible, but expect some damage as Cyris had installed numerous security measures without advising the Board; he was known to be very concerned about his personal security. Payment will be Cr 10,000 per man, plus any hospital expenses. Excessive damage to the mansion will be deducted from the pay.
Referee's Information:
The CEO was in fact paranoid. The mansion, a 3-story structure with basement, is surrounded by a wall and electrified fence, and all manner of visual security, but all of it is camouflaged. The mansion has its own power plant, so cutting external power will not help. The referee can devise any manner of intrusion prevention devices both outside and inside the mansion. Devices are deterrents rather than deathtraps; 1D electrical shocks or normal tranq rounds are the most common, but restraints, nets and gas are employed too. The referee can determine how many devices must be neutralized/avoided to get to the doors.

Windows are heavy duty glass, requiring heavy weapons to break, which the Board will not approve. The roof is sloped such that insertion by rooftop would be very difficult (roll 11+ every round to avoid sliding off, DM for DEX of 10+) and there are no obvious entry points on the roof. The Board prefers that the team enter by the front door, the only door for which they have a pass key.

Inside, the mansion is lavishly furnished, very clean, well lit, and very quiet. The PCs will see occasional serving robots floating around on grav modules, cleaning and tending to the house. These robots will not interact with the PCs at all, and will maneuver to avoid contact (so as not to disturb legitimate guests). The mansion has both conventional stairs and contragravity lift shafts going to all floors.
The mansion will have multiple guest bedrooms, meeting rooms, a main kitchen on the ground floor and sub-kitchens on the other floors. The referee can include any room or feature desired, but leave room in the design for the robot storage/maintenance areas. The mansion staff is entirely robotic, both mobile and stationary robots.

There will be traps deployed throughout the mansion. Suggested indoor traps are hallway doors that lock and block the hallway, sleep gas, laser-triggers, more tranq guns & shock devices. The PCs progress will probably slow to a crawl as they stop to search for traps. Some traps can be disabled by shooting them. Interior walls and doors can be breached with tools by any character with STR of 8+. It will take 5 minutes, and draw the attention of the house defenses to create a breach big enough to use as a passage from room to room.

CEO Cyris will occasionally appear on video comm screens that are placed throughout the mansion. He will be abrupt and rude, all comments around the theme of “Get out” “you are not welcome here” and “I'm calling the police,”. He will not want to interact, or answer questions, nor will he believe their assertions of their purpose. This is actually the house computer, running a hologram avatar program. The computer will contact the police, but the Board has already advised them so they will not respond. The referee can let the PCs sweat about it, though. The computer will not assist the PCs in any way.

The computer core is in the basement, along with the power plant. Hacking the computer will require computer skill and a roll of 10+ (DM +1 for INT 9+) If hacked, the PCs can query the computer for information on the house's defenses. It will reveal that the CEO is on the top floor, and in what room; but the robot defenders cannot be overridden from this location – only the control computer in the master suite can do that.

If the players indicate they are searching an area for traps, any traps present will be detected on a roll of 10+ (DM +1 per level of Tactics skill, and for INT 9+). PCs can attempt to disable the traps, using whichever of Mechanical, Electronics or Computer seems most relevant. Throw 2D for 8+ to disarm a trap. The generator can be shut down on a throw of 7+, DM for any Engineering skill OR Mechanical-3+; the use of gunfire or explosives will shut down the generator on a throw of 7+.

Any destruction of property or gunfire, including lasers, will activate the second level security protocols, which consists of releasing armed guard robots (also on grav modules) to interdict and defeat the intruders. The central computer has the equivalent of Tactics-2, and can direct the robots in tactical maneuvers like surrounding the PCs or splitting the party with robots or locking doors. There are visual and IR detectors throughout the house, the PCs would have to disable the central computer to avoid all the detectors. The house knows where they are from the moment they enter.
The robots are armored in a cloth/reflec shell and armed with TL-8 laser carbines, skill-1. The number of robots should be at least equal the number of the PC's. Robots will not check for morale, they will fight until they are destroyed.

Loss of power to the mansion will not shut off the security robots, but it will break their radio contact with the central computer. Each robot has a default route through the house; it will engage any intruders detected on that route.

At the center of the top level is a bedroom suite; there are three security robots who will not leave the suite; their programming is to defend the person of the CEO. In the center of the room is a large bed. Upon this bed lies a dead man, Mr. Cyris. A character with Medical skill can determine (8+, DM +1/level) that he has been dead for several weeks. Cause of death was some kind of illness, details are left to the referee but no foul play is indicated, and the PCs will not be accused of murder unless the body is destroyed.

By the bed is a control computer. On a roll of 6+ (DM for computer skill) the PCs can shut off all of the mansion's security measures. After that, they can just walk out.

The Board of Directors will consider confirmation of the CEO's demise as fulfillment of their contract. An insurance adjuster will inspect the mansion and may deduct from the PC's pay if the house has been excessively shot up.

The Intertec corporation has many sites on Dekalb and elsewhere in the Corridor. The PCs could be hired as a permanent troubleshooting team.

Some views of the mansion from outside and inside: 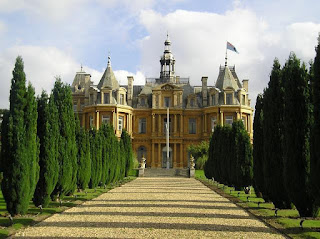 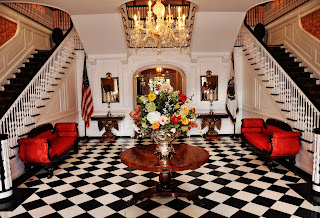 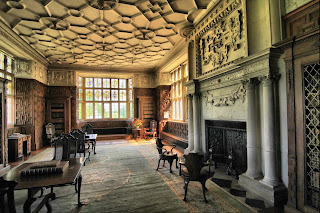 Posted by Robert Weaver at 8:16 PM